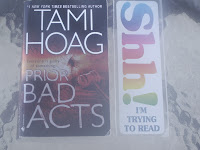 Second Chances!!! No ... it is not the name of the book. As you can see to the right, the title of the book is Prior Bad Acts by Tami Hoag. However you may recall our Mystery Reading Discussion Group at Firewheel Barnes and Noble read an earlier book by this author and I did a blog on it. There were mixed opinions on the other book and my wife said we should have read a later book by the author. In my opinion the other book was okay so I decided to give Tami Hoag another chance. Why not - my wife has all her books and I was needing something to read at the time. So I took a second chance!!!
But if you think about it, this book kind of addresses some second chances in the story. I do not want to give away the story because there was too much to miss if you do not read it. (Incidentally, I highly suggest you read it for yourself.) The accused in a horrible triple homicide gets a break / second chance when the judge declares "prior bad acts" cannot be introduced in the upcoming trial. This unpopular decision ticks a lot of people off and she becomes a victim of an attack because of it.
A detective is assigned to investigating the attack and he thinks the decision by the judge was a lousy one as well. But he decides to give the judge a "second chance" as well. Of course his partner "sees" that the case has become personal to him but this is only a small part of the story.
The man accused of the triple homicide escapes through a series of chaotic circumstances and mistakes. He too has an opportunity / a second chance. Of course he messes up his chances through actions he takes while on the run. I will not say more about this but it just shows that in some cases "prior bad acts" do lead to others. What is interesting is what is learned by the end of the book about the attack on the judge and the triple homicide. There are a lot of theories that pop up in the book. If this has piqued your interest - GOOD!!! You will just have to read the book for yourself. See how many second chances you can find.
It's All About Reading!!!
Posted by misterreereeder at 1:52 AM

From your review - YES! my interest piqued....glad your wife had you give the author a second chance. Now I have more incentive (like I need it) to cozy up and read!!!