A Walk Down A Different Path 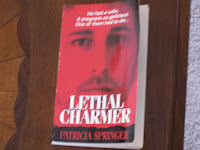 One type of book I do not usually read is the True Crime genre. Lethal Charmer is a book that belongs in this category. It is written by a Texas author - Patricia Springer - so I figured I would give it a shot. In fact (and that is a characteristic of True Crime stories cause they are not fiction), this book is set in the north Texas area.

The story centers around murder that occurred in Fort Worth in Feb 2005. In fact it was a multiple murder of a pregnant woman, her unborn child, and her young son. It made the news not only here but all over. Maybe you heard some of the names of people involved in the story. Stephen Barbee? Lisa Underwood? Jayden Underwood? Detective R. A, Gallaway? These are just a few of them.

The book starts off with a description of what happened that night.

The rest of the book is full of information including a look at the early life of the murderer, what happened leading up to the murder, the investigation of the murder, and the trial for the murder. It also delves into the lives of other persons involved in the story. So why did the murder occur? The murdered woman claimed the unborn baby had to belong to the murderer. Later tests revealed the baby was NOT. The tragedy could have been prevented had there been a paternity test. But since the murderer did hot want his new wife to know, this test probably never would have been made.

Overall I thought the book was a good read. I am not a typical reader of this genre but I would read more by this author.
Posted by misterreereeder at 8:07 AM

Wow - intense reading. I remember when this happened so sad for the victims :/

Umm...too intense for me I am afraid. (And to know it really happened-shudder!!) I need to stick with China Bayle solving crime while planting herbs! :)

Yeah JJ / MT it was intense!!! It's the kind of thing you wish could ONLY be fiction but unfortunately it is true. Even o sometimes fiction imitates life!!!