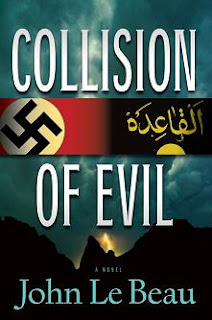 Charles Hirter was an American tourist. He was exploring the countryside in the Bavararian Alps region. Later we find out his grandparents had come to America from Germany. While he was here he was in a habit to hike around the countryside during the day to see everything. His last day he hiked into the mountains. When the weather started to get bad he found a hidden cave and went in for the shelter. While he was there, he made a discovery - a discovery that would result in him being murdered.

This is how Collision of Evil starts out. This book was the first novel written by John J. Le Beau. This is my first time to review a book by an author of this type. As I have said in the past, it is always good to know what you are writing about and this author definitely has a background from which he writes.

John J. Le Beau's background includes the time in the Army and time in the CIA. He has spent time in Europe as well as the Middle East. If you are interested in learning more about the author, check out this page on his website http://www.j-j-lebeau.com/Page/Biography.html.

A single word that bests describes or catagorizes this book is a thriller. A whole lots of things after the murder Charles Hirter and the discovery of his body. The officer responsible for investigating this murder is Kommissar Franz Waldbaer. He is also responsible for notifying the next of kin - Robert Hirter - the brother of the murdered tourist. Shortley after Robert Hirter arrives, the Kommissar learns he is dealing with more than a grieving brother and an unexplained murder.
Robert Hirter is very interested in learning the cause for his brother's death and getting revenge for it. And as the Kommissar is to discover, he is going to need somebody with Robert Hirter's connections to solve this mystery. Back in the states, Charles Hirter is a CIA officer - a fact he reveals after he and the Kommissar learn there is more to the murder of the tourist. The murder was to coverup what was hidden in the cave and what was in the cave was moved shortly afterwards to keep it a secret.
This secret from the past SS days is about to be brought into the present by a group of terrorists. Unless they can find this secret, a lot of people will likely die. An unofficial alliance is made to stop this from happening.
There are a lot of twists and secrets revealed in this book. It is impossible to reveal these in this short review. However, let me say I would highly recommend you read the book and make the discoveries for yourself.
Posted by misterreereeder at 6:00 PM 3 comments: Links to this post