Christmas ... and now I have more to read. I've read some of the authors and now I have more: Last Rights by Philip Shelby; After Dark by Phillip Margolin; Murder Most Maine by Karen MacInerney. Where do I start? Just add them to my list. Yes (to JenningsJunk) ... I have a list too!!! To all the readers of my blog (sounds a little like a song) ... hope your Christmas was good to you. See you next year!!!!
Posted by misterreereeder at 9:37 AM 3 comments: Links to this post 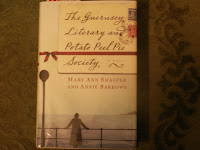 This is a quote from the latest book I read. This came from a book with the title The Guernsey Literary and Potato Peel Pie Society by Mary Ann Shaffer and Annie Barrows. Talk about an interesting title. I probably would not have read the book but when J.A. Jance indicated in her interview that she enjoyed this book I decided I would try it. By the way … I was NOT disappointed.

There were several things I liked about this book. As you can tell from the quote, one of the underlying themes is “It’s All About Reading” - a favorite theme of mine. The story is a collection of communications (mostly letters) between the characters. It was definitely an interesting way to tell the story. I just want to touch on a few of the highlights in the book – to get the full emphasis you have to read it.

One of the main characters is a writer. Her name is Juliet and most of the letters are written by her or to her from another character in the book. One of the letters she gets is from another character named Dawsey. The reason he writes her is an interesting one. He has a book that was previous owned by Juliet and he is looking for more information about the author. Through subsequent letters we learn about The Guernsey Literary and Potato Peel Pie Society.

The Guernsey Literary and Potato Peel Pie Society was a book discussion group – but not at first. The story of how they came into being was an interesting story. One evening they got together for an illegal meal at somebody’s house. When they were leaving, it was past curfew time and they got caught by Nazi soldiers. When asked why they were out after curfew, one of the ladies (Elizabeth) explained they were discussing books and lost track of the time. They were to report in the morning and from then on had to keep up with the act from then on. Not only did they keep up the act but they developed closer relationships among themselves. This was an important bond that lasted during the war and the years to follow – even caring for the daughter of Elizabeth who was taken away by the Nazis.

Why was Potato Peel Pie part of the name of the group? Well, there was an interesting reason. One of the members of the group did not want to be a part of the group unless they had desserts. Potatoes were the only crop that was readily available during the occupation by the Nazis.

Another interesting thing about the group, not everybody had a habit of reading. This habit developed after the group was formed. Each member developed different interests in reading. One member of the group was only interested in cook books. Another member of the group would only read one book over and over.
Oh ... the thing about reading. Each person has a different perspective when reading a book. In fact, when you read something a second time, you may pick up something different. I can not say anymore about the book that would do it any justice. Again I say, YOU JUST HAVE TO READ IT FOR YOURSELF.
Posted by misterreereeder at 8:17 AM 2 comments: Links to this post 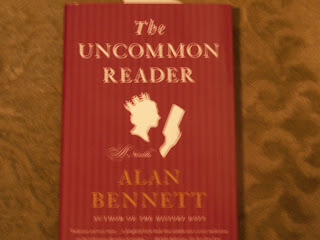 I read about this book on another blog Bloggin' About Books http://blogginboutbooks.blogspot.com/. It sounded like it would be interesting so I thought I should read it - and I was not disappointed. The Uncommon Reader is written by Alan Bennett. Like I said in the title of the post, it is not a mystery but according to another review this is a political and literary satire. It's All About Reading and this is what it is about.

The queen of England stumbles upon a mobile library. Feeling duty bound, she checks out a book from the library and reads it. She becomes interested in reading and starts checking out books on a frequent basis.

Rather than tell any more of this short story (it is a Novella), let me tell you some of the things that impressed me about the book. This book has a lot of witty comments in it - comments similar to comments made by Mark Twain. Since reading is a major theme in this story, there were a lot of comments about reading. Here is one of those comments:

"Of course but briefing is not reading. In fact it is the antithesis of reading. Briefing is terse, factual and to the point. Reading is untidy, discursive and perpetually inviting. Briefing closes down a subject, reading opens it up."

It was interesting to see how reading consumed the queen. It was funny!!! It was great light reading. There are some references to homosexuality in the book but I only found one comment by a character that might be objectionable. Otherwise it was a funny story.
Posted by misterreereeder at 7:20 PM 2 comments: Links to this post

On Participating In A Virtual Book Tour...

The virtual book tour for Blood Island / H. Terrell Griffin has been completed. This was a new experience for me. I enjoyed being a part of it - especially since my part included reading the book and doing a review on it. But my participation did not end there.

So thanks for letting me participate. If you enjoyed the virtual book tour, you may want to check out this blog - Mystery Book News at http://www.mystery-books.com/ . They had a lot to do with the tour and they have a lot of other interesting features as well.
Posted by misterreereeder at 3:10 PM 1 comment: Links to this post 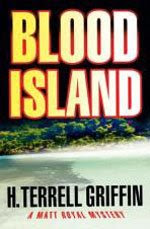 Welcome to this stop on the virtual book tour for Blood Island . The book was written by H. Terrell Griffin who is a retired lawyer. It is the third book in the Matt Royal mystery series.

Terrell Griffin is giving away a signed copy of his book, Blood Island , to one lucky tour visitor. Go to Terry’s book tour page, http://h-terrell-griffin.omnimystery.com/, and enter your name, e-mail address, and this PIN, 8463, for your chance to win. Entries from Mystery Reader Discussion will be accepted until 12:00 Noon (PT) tomorrow (Saturday, December 6). No purchase is required to enter or to win. The winner (first name only) will be announced on Terry’s book tour page next week.

This virtual book tour goes through Saturday, December 6 and there are a few more stops on it. For a list of other sites included in this book tour, click here.

Talk about a book that starts off running - this is one of those. In the first chapter, our sleuth discovers a dead body at a bird sanctuary in Florida. And this is only the beginning. Matt Royal is a retired lawyer now living a relaxed life of a beach bum.

Little did he know what he was getting involved with when his ex-wife came and asked him to look for her missing stepdaughter. As one of the characters put it, it is as if Matt has stirred up a hornets nest when he starts his investigation. People he talks too get murdered. He and his friend get shot at. Somebody is after him and there has to be more to it than his wife's missing stepdaughter - Peggy.

Matt has friends and he is going to need their help in finding Peggy. But he is also going to need the help of some other questionable people as he does his investigation. His investigation leads him to a religious cult lead by Reverend Simmermon. His group seems to have connections in all kinds of things - a massage chain (front for prostitution), drugs, guns, and explosives. When Matt finds Peggy, he learns of a plan to use terrorists-like attacks in order to stir up retaliation against terrorists groups. He and his friends will have to uncover the specifics in order to prevent these attacks on churches in Florida.

I will stop with my brief summary of the book here. I thought the book was full of action and surprises. Not only was it a good story, but I found it interesting because the author did a great job including background describing the area. He also introduced some history about the Seminole Indians in Florida. So do I recommend this book? Yes -- I give it a thumbs up!!
Posted by misterreereeder at 4:34 AM 4 comments: Links to this post