!!!NOTE: I had a hard time writing this blog - not because I did not enjoy the book - because I did. I wanted to write this blog / review in a different way but just could not come up with the proper way. It has also been hard since when it comes to reading a book and writing my review in the blog, I do not start another book until I am finished with the review. FYI: I enjoyed the book (and character) and intend to continue with other books in the series!!!

I have finished reading Nevada Barr’s “Track of The Cat”. It is the first in the Anna Pigeon mystery series. Who is Anna Pigeon? She is a Law Enforcement ranger at a national park of the Guadalupe Mountains in Texas. The author Nevada Barr also worked for the national park services at one time and was stationed in the Guadalupe Mountains. This contributes to her knowledge of the area where this story takes place. I can only assume she also has a first hand knowledge of some of the characters in the story as well. Does her Anna Pigeon character share some characteristics with her?

Among Anna’s duties are protecting the wildlife, making sure people are safe inside the national parks, and when necessary enforcing the rules within the national parks area. She left city life in New York about two years and she prefers the solitude she gets with her job out here.

She has been out looking for signs of cats when she runs across the body of another ranger. It appears the ranger was killed by a cat. Anna realizes there are problems with the clues that point to the ranger being killed by a cat. She also realizes there is a problem with where she found the body. Her suspicious mind considers several possible suspects. Those suspicions grow after she is involved in an accident on the trail and after another ranger is found dead – apparently as a result of his interest in collecting snakes.

After carefully considering all the evidence and following up on clues, she learns the motive behind the deaths and her “accident”. This motive involves the cats she is keeping track of and the money that is paid by hunters to bag these cats in the National Park where she works. She catches the person responsible in the act – a rich rancher. But his justice is not to come in the courts – his justice is to come in the wild – maybe even at the “hands” (paws) of those cats he was making the money off of.
Posted by misterreereeder at 2:16 PM 2 comments: Links to this post

The Camel Club is Back 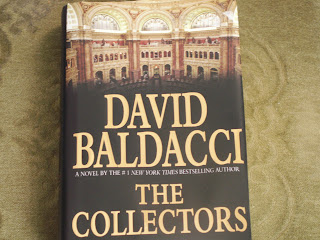 The Camel Club is back - in The Collectors by David Baldacci. Oliver Stone and the other members of the Camel Club are searching for the truth. Following are some of the questions that have to be answered in this book.

The U.S. Speaker of the House has been murdered and a terrorist group has reportedly claimed responsibility. Is this the truth?

The director of the Library of Congress ends of dead inside the rare book collection vault. There is no apparent cause for his death. Could his death have been murder? Is there a connection between his death and the murder of the U.S. Speaker?

Caleb Shaw has been named as the executor for his deceased boss’ personal rare book collection. He discovers a rare book of the Psalm’s in a hidden safe in the vault. Where and how did this book come to be in this collection?

A con artist is introduced. She comes to DC and helps the Camel Club. What is her connection? Will she hang around?

These are just a portion of the questions the Camel Club are looking at. The best way to see how they do is to read the book – and I think it is worth it.

Posted by misterreereeder at 6:06 PM 2 comments: Links to this post 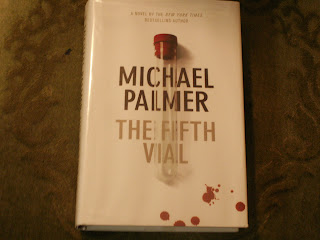 Mysteries are like ice cream - they come in different flavors. This is not surprising. I bring this up because I was asked while reading this month’s Mystery Discussion Group book selection whether it was better than the last book I read. The book is called “The Fifth Vial” and it is by Michael Palmer. Palmer is a M.D. and this is a medical thriller – that in itself places it in a different category from the other book I read. Overall I would give it a “thumbs up”.

It has an interesting premise for the story. The mystery revolves around a business in which people are kidnapped and body parts are taken from them. For what? To be transplanted into other people. And the complete business operation is a complex one. Who runs the business? Why do they? How do they?

There is a secret / worldwide organization based on some of Plato’s philosophies. As a matter of fact, each chapter opens with a quote from Plato. This organization identifies who they determine to be best deserving candidates for transplant surgery. Then they locate potential donors based on matching criteria. These donors are unaware they are being considered for these secret transplants. The “fifth vial” is the key to the selection of these donors and uncovering this is what breaks the mystery in this book.

The first donor introduced in this book is a man who seems to be mentally challenged. He was kidnapped and we do not know the reason why until after he is killed by a semi-truck. While doing an autopsy on the unidentified man, a pathologist discovers fresh incisions that lead to the discovery that he was a donor of bone marrow. A watchdog organization brings in a PI named Ben to learn the identity of the man and if possible, what happened to the man. At first he does not have any luck. But he learns the identity of the dead man and finally gets a lead on what happened to him. Following up on his investigation he learns about a laboratory that does blood tests for doctors. He also learns about a fifth vial of blood taken and supposedly kept for backups – in case retests are needed. These vials are shipped for “storage” to a facility in Texas. He learns the secret that these vials of blood are actually tested / screened for transplant compatibility.

Another person to become involved in this mystery is a female medical student named Natalie. She was a serious ex-track athlete. She does not realize it but she is chosen to become an unwilling lung donor. When she makes a trip to Brazil to make a presentation at a transplant conference, she is kidnapped and drugged. What she remembers is being kidnapped and getting shot when she is escaping. She awakes later and is told her lung was damaged by the bullet and had to be removed. She feels lucky to be alive and is making a good recovery with a single lung. Her healthy lung however gets damaged when she rescues her mother and a handicapped niece from a fire. Being a medical student and working in the area of transplants, she realizes her chances are not very promising. She is contacted by an insurance rep who is trying to pay for her medical bills. No bills have been submitted by the doctors or hospital in Brazil. The mystery deepens when Natalie contacts the hospital and they cannot find any records of her or her surgery. She decides to go down to Brazil to get to the bottom of this. Little did she know that she would find out a totally different story than what she remembers. She will find out she was an unwilling lung donor.

The other person who becomes involved in this investigation is actually a medical scientist. His name is Dr Anson and he is involved in research developing a promising miracle drug. Whitestone Labs is funding his research. They are waiting for him to complete his research and release his secrets to them for mass production (and marketing). But patience is running thin and Dr Anson has a physical problem that could strike him down before he releases his secrets. He has pulmonary fibrosis and has not consented to having a transplant to correct the problem. A close colleague arranges to have him drugged to make it imperative for him to consent to have a transplant. He consents to have a transplant from a matching donor in India who supposedly is being kept alive on machines for the transplant. He gets the transplant and does well. To get him to release his secrets, his colleague agrees to arrange a meeting with the “deceased donor’s” wife and family. During this meeting, he realizes this is a staged meeting. Afterwards he learns the truth about some of the lies they tried to pass off on him. He has a meeting with his colleague where he threatens to destroy his work unless he learns the truth about who his donor was. Finally he gets to the truth and learns the lung actually came from the medical student Natalie – she was NOT a random donor.

In Brazil, Natalie learns the truth about her lung from a tip from a nurse. When she plans to meet the nurse, she learns the nurse has been murdered. Natalie is almost killed by a crooked member of the military police while traveling to the place where her operation and recovery occurred. There she meets the brother of the nurse who was murdered. He agrees to avenge the death of his sister by helping Natalie get to the truth. They learn more of the truth when they save our PI from being killed. (You will have to learn about how he came to be here by reading the book yourself.) And she finally learns that her mentor – a transplant doctor is involved in this secret society making these transplant decisions. Another potential and live donor is in place to have her heart taken and given to a more “deserving” recipient.

You need to read the book because there is so much more going on – before, during, and after. It was very interesting how the author used his medical knowledge to make this mystery story. After the story, he gives a little information about becoming a transplant donor.

Incidentally, I mentioned about mysteries being like ice cream earlier. You have your favorites but you like to try something different every once in a while. This was not something I would typically have read but I will plan on reading other books by this author in the future.
Posted by misterreereeder at 7:55 AM 2 comments: Links to this post