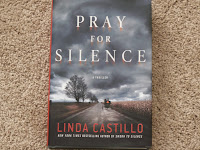 It was not long ago when I read Sworn to Silence by Linda Castillo. I was eagerly awaiting the release of the next book in this Amish mystery series featuring Police Chief Kate Burkholder. Well ... Pray For Silence was just released and the wait is over!!! Now that I have read it I have to say it was not exactly what I expected.

And that is how the story starts off - not according to expectations. Here is why! When you think of an Amish community, you think of the simple life - almost a paradise. (I do anyway.) There should be few distractions and none (or little) of the typical English stresses. By the way, in case you do not know, the English is how the Amish refer to those outside of their faith / community.

Anyhow, the story starts off with the discovery of an entire Amish household being brutally murdered. The big question is why? And the related question is who did it? There is little to point to the reason or who did it. The investigation goes slow but little by little possible clues come up.

The chief of police, Kate Burkholder, has been on both sides - she was raised in an Amish family but she left the Amish community when she came of age. Now she is back serving both parts of the community - the English and the Amish. This presents some challenge since she is now outside of the Amish community but is still seen as an outsider by the other part of the community as well. The Amish part of her struggles with the murder of the family and complicates the law enforcement side of her.

In addition to this struggle, she has a struggle with personal feelings she has for John Tomasetti - an investigator with the state who helped in the previous book. Both have their share of problems and neither of them feel comfortable sharing their personal feelings with each other. Put them together with a case to solve, they both try to concentrate on the case and avoid their obvious feelings for each other.

There are a number of possibilities they have to examine to determine the reason for the murder. At first it was thought to be a murder/suicide which seems so unlikely within the Amish lifestyle. This was quickly ruled out when it became apparent the suicide was staged.

I think it best for you to see all the possibilities as they are being considered in the story so I will not give any more. These are parts that make the story different than what was expected. Even so (and maybe because of this as well), I really found the story interesting - you might too!!!

In case you want to check out more on this author, she has a web page. It is located at http://www.lindacastillo.com/.
Posted by misterreereeder at 1:17 AM

Oh my! I need to get more serious about my current book stack because there aren't any titles I'm willing to give up (...thanks to great reviews from here) - this has REALLY peaked my interest for both books!!

Wow, that sounds very intense, but GOOD! I think I may need to check this one out!