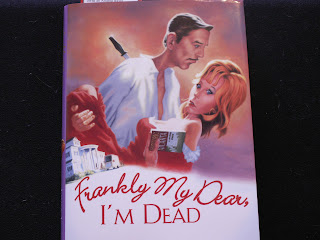 This is the first book in a new series (November 2008) and the paperback version has just recently been released. It is book #1 in a Literary Tour Mystery Series and it is called Frankly My Dear , I'm Dead. Does it sound kind of familiar? The author of this series is no stranger to me - she is Livia J. Washburn - Texas author of the Fresh Baked Mystery Series.

It isn't surprising that an author will do more than just one series. I could not tell you why because I know there are a number of good reasons. One series might attract a different audience than another.
So what are the attractions of this new series? Well ... I can only name a few. This is a series that features a divorcee who has opened her own literary travel agency. Her name is Delilah Dickinson. The theme for her first tour is Gone With The Wind and the author Margaret Mitchell. Just like there are people who would be interested in this tour, there are people who would like to read about it. Incidentally, as an extra bonus at the back of the book, there is real information about Gone With The Wind Tours.
Delilah wants to have a successful tour under her belt for the start of her business. This tour starts with a problem between two of her customers - one accusing the other of trying to steal his camera. This will be nothing though compared to other problems occurring in the tour. One of the tour stops is at a plantation fashioned after Tara in Gone With The Wind - complete with performers dressed for a reenactment. Things go awry when the actor who resembles Rhett Butler is found stabbed to death. And this is not the end of the trouble for this tour. Hoping to salvage what she can, Delilah decides she needs to help solve this murder (and other problems I will not mention) - not only for the business but to prove the innocence of herself, her son-in-law, and her two granddaughters.
Will Delilah's business survive murder? Time will tell. As a matter of fact, the next book in the series is scheduled to be released next month and this tour will involve one of my early favorite authors - Mark Twain who wrote about Tom Sawyer and Huck Finn. The name of the next book is surprisingly called ... Huckleberry Finished. This should be interesting!!!
So ... do you like to travel? Like one of Delilah's granddaughters commented - murder does make the tour more interesting!!!
Posted by misterreereeder at 8:21 AM

eeeek - I just got my hands on Ms Washburn's latest Fresh Baked Mystery - Killer Crab Cakes and now I'm seeing another series that's right up my alley!!!! Awesomeness!!! :-) now I need to make time to enjoy my current Washburn book so I can enjoy this next Washburn book !!!!