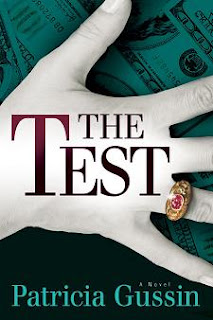 Paul Parnell was a billionaire and a philanthropist. He also had a family from two marriages and one affair. As he is preparing to die, he wants to leave his family more than money. Where he had failed in life, he hoped his will and the test for each of his offspring will produce better outcomes in their lives. This is where Patricia Gussin's new novel called The Test picks up. This is her third book. Shadow of Death and Twisted Justice were her first two.
Paul's offspring (and their families) are gathered together for the reading of the will. They include: two sons from his first marriage - Frank (a U.S. Senator with White house aspirations) and Dan (a Florida Pam Tree farmer); two daughters and an adopted daughter from his second marriage - Rory (the adopted daughter married to a doctor), Carla, and Ashley; and a daughter from an affair between the two marriages - Monica (a famous female vocalist).
Each of the kids are given individual letters telling them what their father wants them to accomplish within a year's time. At the end of the year the remainder of the estate (valued at about 2 billion dollars) is to be split up to those who sufficiently meet the requirements designated in the individual letters. Some are not interested in the remainder of the inheritance - like Monica. Others are influenced by somebody near them to pursue the inheritance - these include Dan, Carla, and Ashley. Frank is interested for his political pursuits.
Only the contents of the letter to Frank are made known to us the readers. It says:
This is what I want for you: ethics and compassion as a senator; commitment to the community, both personal and financial; celebration of your faith, Catholicism, and for Meredith, Judaism.
There are a lot of things that will happen within Paul Parnell's surviving family over the next year. Some will die and others are threatened by death. I do not want to give away too much of the story. I think it is interesting how the author blends in real current events to the story - like the election fiasco in Florida and 911. It was also interesting how she uses a past event to affect this family's present - no ... I can't give that away. Let me conclude by saying that I would highly recommend this book as a must read.
If you are interested in learning more about this author, check out her website at http://www.patriciagussin.com/.
Posted by misterreereeder at 7:25 PM

Sounds very interesting. Looks like another one to add to my virtual bedside table :D

MR, this was a wonderful review! You certainly peaked my interest. Sounds like this will be a must read!