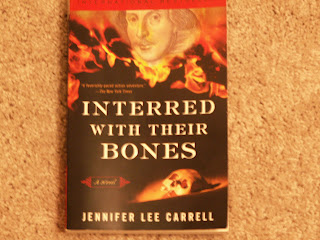 EXPOSED!!! This is one of those things that happens being a part of the Firewheel B&N Mystery Discussion Group. The way it works we each have an opportunity to select a book to be read by the group and discussed. It would be impossible for each of us to have the same interests – other than reading mysteries. And apparently there are SO MANY possibilities out there it is not surprising that we might get EXPOSED to authors and mysteries we might otherwise have not been exposed to. This month is NO exception. This month’s selection was Interred With Their Bones by Jennifer Lee Carrell. To the person who suggested this book, GREAT CHOICE!!!

Kate Stanley is preparing for the production of one of Shakespeare's plays - Hamlet - at the Globe theatre. She has no intentions of being a sleuth but her world is shaken up by the appearance of her mentor from Harvard - Rosalind Howard. She handed her a package and promised an explanation later if Kate would meet her. Kate went for the meeting but it never took place. Instead she hurried back to the theatre to find it on fire. Here it just gets interesting because a similar event happened at the theatre many years ago. In that historic fire only one person lost their life and it appears only one life was lost here - Rosalind.

It becomes even more peculiar when the cause of Rosalind's death s determined to be similar to the death of a character in Shakespeare's plays. Whatever Roz was trying to get Kate involved in. somebody seemed to want it to remain a secret. Kate is determined to followup on this dangerous quest.

It was interesting to see how the author did this book. It was a mixture of the current story with that of some Shakespearean history. It was written with elements of a play - prologue, acts, and interludes. There were a lot of twists in the story and a lot of secrets. Who would have thought there were so many murders in Shakespeare's works.

This is all I want to say about this book except how our discussion rated it. If you cannot tell, I give it a thumbs up. And as far as the rest of the group is concerned, the vote was ... 6 thumbs up, 1 thumb down, one thumb wavering, and 3 abstains since they did not get a chance to read the book.
Posted by misterreereeder at 9:00 PM

Thanks for sharing your reading group picks too! I'm sure I would have never picked up this book, but I'll be putting it on "nightstand" stack to read :D

Enjoyed the book club last night and I was a thumbs up on this book.

Looking forward to reading the next.

Hi MR! Wanted to revisit this review since I just finished reading this one...oh my! it was good!! I liked it all, the travel, the mystery(s), the twists. Like I noted in my first comment, I probably wouldn't have picked this book and that would have been such a shame. I also didn't realize there would be a bonus in the Author's Note at the end of the book-glad I didn't miss out on how it all came about. Very cool! Thanks again for all the reviews!!