A Political Thriler - The Hornbrook Prophecy 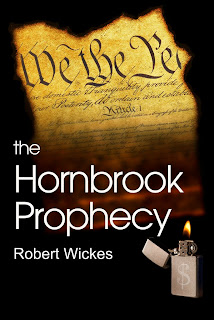 I am again challenged to read a book different from what I typically read. This one is a political thriller by Robert Wickes and it is called The Hornbrook Prophecy. This is from a review I read that caught my interest - In this taut, tense, uncompromising novel of suspense, author Robert V. Wickes deftly blurs the lines between fiction and reality leaving readers to wonder whether The Hornbrook Prophecy is fiction, or prediction. From its ominous Prologue set in ancient Rome to the shocking final scenes in the nation’s capital, The Hornbrook Prophecy reveals an uncomfortably and terrifyingly-real plot that will leave readers captivated until the final, explosive pages.

One thing for sure, this certainly presents some things that would be of interest for anybody who likes political thrillers. It does not matter what your views are and you may have similar (or dissimilar) views. There are some things I could see as I read that I certainly could identify as being too familiar with right now.

You have those politicians who are simply incompetent but keep getting reelected because they have been able to convince their constituents that they need them in office. You also have some politicians who are trying to do their best for their constituents. You also have some groups who are simply being mislead and do things that are not productive for society.

After reading this book, I can only say I hope things do not get this bad here in America. I have faith there are enough intelligent and caring people that things will not go this far bad before things have to be fixed like they had to be in the book.

Why read this book? One thing for sure, the book gives some food for thought. What are likely to be the results of reading this fictional account? Some will definitely dismiss it as fiction. Others will use it as a catalyst to become involved or more involved politically.

There were things I enjoyed about the way the author wrote. He used various references to different people and characters like Will Rogers and some of his quotes. He also referred to Don Quixote through his characters. And there were characters in the book I liked.

Elgin LaGrande was a Lieutenant Governor in Alabama and in spite of his position in the state government was very interested in doing things outside of the political arena to improve the lives of his constituents.

Also interesting was Senator Hornbrook - a respected independent. While his ideas were not always shared by me, his interest in not just his constituents but his country were something I liked.

There were also those persons who were not directly involved in politics. Their interest was in keeping their freedoms and control of their lives. At the same time they were still willing to help others in need.

There was a quote in the book that I liked. It was made by Albert Jay Nock. He said, "There are two methods, or means, and only two, whereby man's needs and desires can be satisfied. One is the production and exchange of wealth; this is the economic means. The other is the uncompensated appropriation of wealth produced by others; this is the political means." This is a provocative thought. Is there some truth in it? Yes ... but I think both methods are needed - with balance!!! What do you think???
Posted by misterreereeder at 3:35 AM

hmmmmmm - I'm not typically a political thriller reader but this does sound interesting.