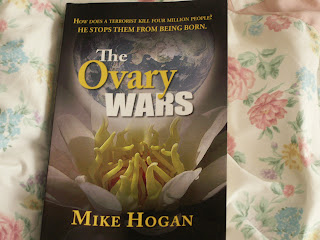 How does something like this start? Well, it starts as a think tank type project tackling a growing problem - a population that is growing too fast and living too long. And when certain rules are thrown out - like morals - it can lead to problems. That is what happens here.

An American mathematician comes up with the idea and takes it overseas to get developed in an atmosphere not as restricted as in the USA. When the project shows success it is used by unscrupulous people to attack the USA. The results - women of child-bearing age are no longer having children - their ovaries have actually dried up. Also as a result, the economy goes haywire - starting with the medical staff who work with pregnant women, then doctors who deal with pediatrics, and industries dealing with baby products. This also causes a lot of new cases of depression and suicides.

But how did this happen? The President of the US has his staff trying to determine what the cause of this phenomenon is - a fluke or a terrorist attack. Agents Emily Chandler and Pete Vangard are on the job and their motives are entirely different. Emily Chandler is driven by additional anger because she will not be able to have the children she has been putting off because of the job. Their investigation keeps leading to dead ends when key people in the investigation die. When it becomes apparent that prechild bearing aged females were NOT affected by this unknown attack, more emphasis is placed in the investigation to discover and prevent additional attacks.

This is something you will have to read. It is more than a story about the investigation. It also follows the lives of a family - the family of a good-hearted doctor and how it affects his practice, family, and ultimately his death.

Is there hope? READ and check it out!!! (HINT: Revenge is sweet!!!)
Posted by misterreereeder at 4:22 AM

You've done another great review...I have to admit, at first glance I was put off by the title and cover. Glad you did the review, now my interest is peaked :D