MRD Group Goes "Over The Pond" for August Selection 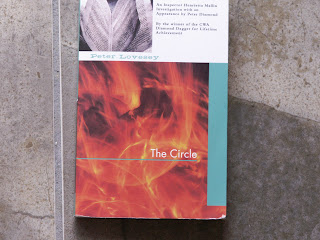 You heard it right!!! Our Mystery Reading Discussion Group went "over the pond" for our August Selection. Not literally - but the book we read by Peter Lovesey is called The Circle and it takes place on the other side of the ocean in a place called Chichester. It was recommended for our group to be read by our informal leader - Mary Anne.

The mystery in this book seems to revolve around the circle - a group of aspiring writers who get together and meet once a month. It starts with the murder of one of its guest speakers - a book publisher. The method of the murder is arson. The first suspect the police have for the murder is the chairman of the group who was supposed to have a book published by the mans company. Several of the members and the newest (not yet a member Bob) sets out to prove the chairman is not guilty. Things get somewhat complicated when there is an attempt at murder of Bob and murder of another circle member - these were done through arson as well. This causes the police to reconsider their investigation since their primary suspect had been in jail. The question is - why are members of the "circle" being targeted and is the person responsible a member of the "circle"?

Our "group" / the Mystery Reading Discussion group at Firewheel Mall did the typical rating of the book. There were 10 of us who got together to discuss it. One person abstained from the vote since she did not get a chance to read it. Of the other nine, the vote was unanimous - 9 thumbs up. What were the reasons it was given these thumbs up? I suspect part of the reason was the British humor in the book. It is the dry kind of humor - not the joke kind. Another thing that was interesting were the variety of characters / members of the circle - and their involvement in the mystery. One of the characters started writing a blog about the mystery. Some of the information released in the blog showed there was a leak in the police department.

As far as our group is concerned, some figured out who the person who was responsible earlier than others who were surprised. All in all though the group enjoyed the mystery and some are anxious to read more by this author. For more information about this author you can check out his website at http://peterlovesey.com/.
Posted by misterreereeder at 6:06 AM