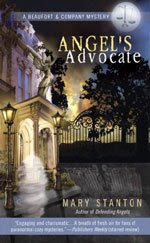 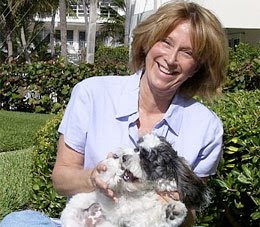 Welcome to this stop on the Virtual Book Tour for Mary Stanton and her newest book in the Beaufort & Company Mystery Series. It is called ANGEL'S Advocate. Mary has certainly found her niche in this series. The first book in the series (which I have not read ... YET) was called Defending ANGELS. Mary has a website in case you are interested in checking it out.

The series has an interesting cast of characters. Bree Winston Beaufort is the practicing lawyer at Beaufort & Company. The "company" includes Ron (her secretary), Petru (her paralegal), and Lavinia (her landlady). Oh ... I should not forget Sasha - the office dog she rescued from a trap in the adjoining cemetery. In this book she has agreed to take on a case of a teenage cheerleader who stole money from a Girl Scout selling cookies in front of a store. This is NOT her typical case - and it is NOT her ONLY case. She is also taken on the case of the cheerleader's father who died four months earlier - this is definitely NOT a NORMAL case. As with any case, she and her "company" must investigate prior to the trial date. Is it possible there is a connection between these two cases?
The case against the cheerleader is scheduled to go to court in the Chatham County courthouse and the cheerleader is not making it easy for Bree to represent her. The case of her father is to be handled in an entirely different court - the Celestial Court of Appeals. The reason is to prove he did not commit suicide but was murdered. Definitely an interesting plot. But there are those who do NOT want Bree to succeed - both in the real world and the ghost world.
I think the book was interesting. It was fun to read even though it was different. You should try it out.
Mary Stanton is giving away a signed copy of her book, Angel’s Advocate, to one lucky tour visitor. Go to Mary’s book tour page, http://mary-stanton.omnimystery.com/, enter your name, e-mail address, and this PIN, 6209, for your chance to win. Entries from Mystery Reader Discussion will be accepted until 12:00 Noon (PT) tomorrow - Wednesday, June 3rd. No purchase is required to enter or to win. The winner (first name only) will be announced on Mary’s book tour page next week.
Posted by misterreereeder at 1:01 AM

Interesting and intriguing....hmmmmm-I like this twist of the here and the here after. Thanks for the review and participating in the blog tour. Now I'm off to add this to my "wanna read" list - I put my name/entry into the hat to win a copy, but if I don't win one, I'm still gonna get my hands on a copy :D

Not really into the paranormal thing, but this sounds interesting. Might need to check it out.

Thanks and Good Luck JJ.

Itsamystery - I am not really in the paranormal either. It was definitely interesting though. I think it is worth checking it out.

The author definitely added her own twist to the genre. I enjoyed Angel's Advocate quite a bit myself.