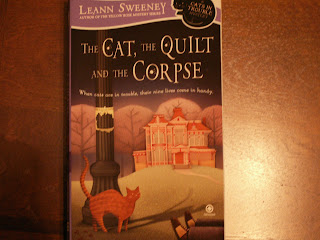 Branching out!!! Starting a new series!!! I believe this is a natural progression for a successful author. Leann Sweeney has a successful series - the Yellow Rose Mystery series. Currently there are 5 books in this series and it takes place in Houston, Texas and surrounding areas. This happens to be where I was born and lived mostly until I moved a little over 10 years ago. Oh ... by the way ... I enjoyed the series ... especially those places I could visualize where they were supposed to be.
Now Leann has started a new series - A Cats In Trouble mystery - with the first book called The Cat, The Quilt, And The Corpse. This book takes place in a small town called Mercy in South Carolina. The main character was Jillian Hart who lost her husband shortly after they had moved from Texas to Mercy. She makes quilts for cats and sales them through cat shows. The book opens with her returning from an overnight business trip to find her house has been broken into. Not only that but one of her three cats is missing. But this is just the beginning for Jillian. I will not give away the story but you already know from the title that there has to be a body/corpse involved.
This was a great start for a series - including the introduction of a new character. I am looking forward to more to follow. By the way ... I heard this book was a number one seller on IndependentMysteryBooksellers List for May!!!
EXTRA!!! If you like cats, there is a lot of information about cats. I did not know there were so many different kinds of cats and there were some good descriptions.
Posted by misterreereeder at 8:45 PM

WoooHoooo! I also enjoyed the Yellow Rose Mystery series discovered through your reviews. Now I need to get caught up with the books on my night table so I can check this one out. Another great review! Thanks for taking the time and sharing !!!!