A Miniature Mystery-Malice in Minature 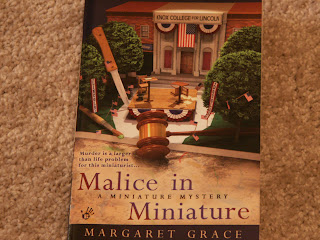 Another subject for another series. This series is developed around miniatures - the people whose hobby is to make miniatures. I had intentions to start from the beginning of the series. In fact, I had ordered the first in the series but instead got Malice in Miniature by Margaret Grace in it's place. When I had started reading it something seemed amiss and I realized this was NOT the first one in the series. Oh well ... once started, I could not put it down. I will have to get the first one (and second one) to read later.
The main character is retired and her hobby is miniatures. Her name is Geraldine Porter. She is a widow and her son, daughter-in-law, and granddaughter have moved in with her until their house is finished. She (and her daughter-in-law who is an artist) are preparing for a local event centered around the reenactment of the Lincoln-Douglas debates.
Another artist also involved in the event is discovered murdered and paintings are slashed. Geraldine is asked by a neighbor to look into the incident since her best friend was involved with the artist. So why did her neighbor ask her to get involved? Apparently she had become involved in some earlier investigation/books and been successful. A lot of things keep pointing to the friends' guilt but other things do not add up. It will take the help of family (including her granddaughter and nephew who is a cop) and friends for Geraldine to get to the bottom of this.
This book blended a lot. It was not just a mystery - it included a lot of other interesting aspects of the story. There were good development of character relationships. There was a good blend real life events - not to mention a Texas event involving murder in a cheer leading competition. There was even a good use of the local library - and I am partial to the local library.
This was a good book and I am glad to have read it. This is another series I will have to follow. Incidentally, the author has another mystery series based on the periodic table. She uses a different pen name for the series - Camille Minichino. I may have to check it out as well.
Incidentally, Margaret Grace (aka Camille Minichino) does not just write about a character who makes miniatures, she als o makes miniatures herself. To see some of her work go to http://www.dollhousemysteries.com/Gallery/index.html.
Posted by misterreereeder at 10:50 AM

Sounds like an interesting series. Looking forward to your reviews on the 1st and 2nd books too :-)

You and I have discussed this author--glad to see you do a post on her and the book. I am facinated by her collections, and the books she is writing. Thanks as always for the great review!

Hi all, I'm just back from a week in NYC and so I'm late checking into this. Thanks so much for taking the time to review my books.

I'm looking forward to the 4th MOURNING IN MINIATURE, coming in October.

If you'd like souvenir bookmarks, pens, rulers, send your address to camille@minichino.com, with mysterreereader in the subject line!

Great post and review! I have really really been wanting to read this one! There are soooo many cozy series out there that are tons of fun to read!

Thanks for your comments and I will look forward to the 4th book. But TODAY ... I am expecting the delivery of the first two books. Can't wait. So much to read but so little time!!!