Back To The Beginning - A Fresh Baked Mystery 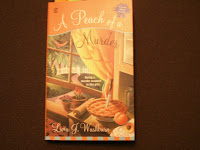 This is where it starts for our retired teacher turned sleuth - Phyllis Newsom. Phyllis and others are picking out choice peaches in preparation for a cooking contest at the annual Peach Festival. This is the first time she finds a dead body - the owner of the Peach Farm. It appears this could have been a death by accident but later Phyllis questions if it was an accident or if it was murder.

But there are a few other things to take Phyllis' mind off the accident. First, she is trying to come up with a winnable recipe for the cooking contest. Also, she has some concerns about another retired teacher who boards with her who is becoming more and more distant. In addition, she has a vacant room to board and the next person interested in boarding (also a retired school teacher) is a man - Sam Fletcher. This may not set well with her other female boarders. Finally ... on the day of the contest, one of the cooking contest judges dies ... in front of her booth ... after eating her contest entry ... from an apparent poisoning. She has suddenly become a suspect. One of her other boarders, Carolyn, who always wins in the cooking contests, becomes the most likely suspect. Phyllis vows to herself she will find the real killer.

Let me tell you, a lot happens and I will not reveal too much of it because I think it is worth reading. But there are a few observations I want to make. First as in most other things entertaining, you need to find something that would appeal to your audience. In the case of this series, besides it being a mystery series, there is the theme of baking. The author has several recipes that are prepared in the course of the book. As a bonus the author gives the recipes for some of these - Phyllis's Spicy Peach Cobbler, Carolyn's Peaches and Cream Cheesecake, and Mama's Roast Supreme (Coke Roast). (Note: I think our author has probably done some experimenting like Phyllis did to come up with some recipes herself - see this post in her blog -http://liviajwashburn.blogspot.com/2009/04/sweet-potato-buttermilk-pie.html.)

I think another example of her finding to appeal to her audience is a timely use of a recognizable quote like the one used by Sam Fletcher - "No brag, just fact". This has the same kind of appeal they are using in TV shows where they use songs and oldies to appeal to their audiences.

And finally, in this book, she used something emotionally and "real" to appeal to her audience. She lets us see how having somebody growing old and having problems keeping it together affects everybody around them - specifically ourselves. Again ... one of the things helping a writer to keep an audience is their ability to write from experience and research ... AND ... most likely this writer is using both.
Posted by misterreereeder at 10:30 PM

I agree! "a lot happens" and you did awesome not revealing too much! My hook - it's set in Texas and does a great job of making the area alive but not smothering me with too much background detail. I enjoyed the characters a lot and could picture anyone of them in my comings and goings. And best of all - I enjoyed the mystery and how it unraveled. Thanks for another wonderful review.

I just bought this book last week! Actually, I took it to Mother. She gets to read it first. It really looks good.
JJ--I'll pass it on to you and your mom when I get it back!