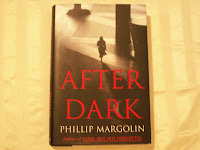 One of the gifts I got for Christmas was this book by Phillip Margolin call After Dark. (Thanks Cathie and Tracy!!) Yes ... I finally got around to reading it and Tina read it before me. (By the way, she enjoyed it also!!) It was a very interesting Crime Thriller. It may also be classified as a legal thriller.
Abigail Griffin is a successful prosecutor in the DA's office. That is until one of the most dangerous person she put on death row has his case overturn by the Oregon State Supreme Court - a decision made in part by one of the Justices on the court - her husband. She feels he did it to get back at her because she has filed for a divorce. And things just get worse for her (or better for the story) when her husband is blown up by a bomb (similar to the one used by the person she had put on death row who was released by her husband). At first everything seems to point to Charlie Deems - that dangerous person. Then things start pointing to her. She is also suspected of murdering her husband's clerk a few weeks earlier.
Abbie has to rely on help from Matthew Reynolds (the other side) to get her out of jail and out of this predicament. Matthew Reynolds has made a successful practice out of keeping persons off death row. It is from him we learn the meaning of "after dark". It is "after dark" when an attorney finds themselves visiting the penitentiary and leaving in the morning after their client has been executed. His motivation is on a personal level - his father was executed for a crime he did not commit - a crime somebody else confessed to afterwards.
There is a lot of "stuff" going on in this book. There are so many twists and turns. If Abbie did not commit the murders, who did? And who will figure it out? You may figure it out "or" you may suspect you have figured it out but I am not going to give it away. There are just some things you have to see for yourself.
Posted by misterreereeder at 8:55 PM

Darn - I mean yeah! another great review. I almost thought I could put this a little further down on my "wanna" read list until the teaser at the end. Gifts are so cool, you never know what kind of surprise nugget you'll find?!