"The Price Of Death 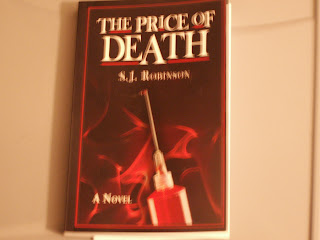 Do you remember the phrase “the names have been changed”? That was from Dragnet – and yes – I may be dating myself. Well, I just completed another book recommended to me by Phenix & Phenix Literary Publicists. The title of the book was “The Price Of Death” and it was written by S.J. Robinson. It is NOT a cop thing like Dragnet was, but I thought about Dragnet because this book is a fictional account addressing a real issue.

Speaking of “names being changed” our main character is Jessica Lamm. She used to be a nurse who went to law school and became an attorney. This sounds a whole lot like our author – S.J. Robinson!!! Jessica Lamm’s practice also sounds similar to that of the author – she deals with medical malpractice.

Jessica Lamm has taken on a case involving a death during an emergency room visit. The man who died was a young man in the prime of his life with a wife and kid. Although he went into the emergency room with a problem, it did not seem to be sufficient cause for his death. The emergency room doctor was from Iraq. In his initial confusing conversation with the wife, he indicated the death should not have taken place. The CEO for the hospital showed up and spoke with the wife after he sent the doctor away. The wife requested an autopsy be done on her husband and has decided to get a lawyer – Jessica Lamm.

But this is no simple case of malpractice. Do you think a simple case of malpractice would not lead to a break-in, bugging, attempted murder, and murder? Hardly!!! On the other hand, a business involving counterfeit drugs could. To discover how the connection is made, you need to read the book.
One thing I will say about the book, it was interesting to read what is involved in a lawyer's investigation. The lawyer has to think about different things uncovered in the investigation and how to proceed from there.
Posted by misterreereeder at 9:17 PM

Sounds like a lot of stuff going on in this book. Intriguing :-)

There's nothing better than a good mystery. It's fun to watch the pieces come together ... and still others never fill in. Mysteries are a parable of life in that sense.

JJ - Thanks for your comment and being a constatnt on my blog.

Robert - Thanks for your comment. It is nice having new people look at my blog.

FYI!!! I was not satisfied with my first blog on "The Price of Death" and am working on another. I will post it soon.