Have you heard about the Southwest Chapter of the Mystery Writers of America? They have a website: http://www.mwasw.org/. I discovered the website a couple of years ago and I learned they had monthly meetings in Dallas - the first Saturday of the month (except January - I think). The meeting will have an interesting speaker and /or workshop for a particular subject. And the nice thing is that you do not have to be a member to go to these meetings. It was at the last meeting I heard about this new author David Henry and his new book The Padre Puzzle. David Henry attends some of these meetings too. The immediate attraction for me was that this is a Texas author (and if you know me - I like Texas authors) and this mystery occurs in Texas - another thing I like. 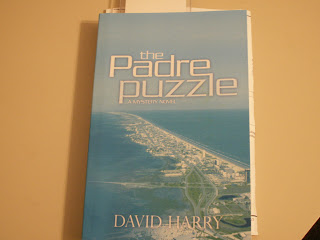 So I ordered the book through Amazon.com. It was published by hotray.com and is only available through a limited outlets currently. Before I go any further I will say it was well worth it.

If you like mysteries involving Texas Rangers (the law enforcement group not to be mistaken for the NEW American League Champions), the Coast Guard, drugs, and terrorists, then I think you will enjoy it as well. I also heard this is the first in a series involving the main character Jimmy Redstone - the Texas Ranger - so if you like it you can look forward to more.

As mentioned above, Jimmy Redstone is a Texas Ranger. He has been sent on leave to Padre Island to recover from a gunshot wound he got while on duty. His recovery involves some rehab with a physical trainer and physical activity.

While on Padre Island he visits with the son of one of his former partners in the Rangers. Little did they know they were fixin' (that is one of those Texas words) to become involved in something big. The son of his former partner is in the Coast Guards and he has to go out on an emergency call. Since he is shorthanded and Jimmy is visiting, he invites Jimmy along for the ride. When they reach the place of the emergency, they are turned away - starting this big puzzle. When they are returning to the station, they hear about the recovery of a body on the beach. Redstone learns later that this body was actually a murder - the murder of a fellow Texas Ranger who was undercover.

Officially, Redstone is on leave but unofficially he is placed on undercover duty to learn what happened to his fellow Texas Ranger. He learns there is something big going on that involves a lot of law enforcement agencies including the local and county police, the Coast Guard, DEA, and Homeland Security.

There are a lot of pieces to this puzzle and there is a lot going on to keep some of this puzzle quiet. Redstone is partnered with a local South Padre policewoman in part of the investigation. They are attacked during their investigation and Redstone's Ranger friend is sent to the hospital in a coma after an attack is made on him as well.

I hope this has sparked your interest a little because there is a lot going on in the story. It is best to become a part of the story by reading it for yourself. There may be some things that were left unexplained in the story but I hope you enjoyed it as much as I did.
Posted by misterreereeder at 9:01 AM

I've been looking forward to this review since an earlier teaser :-) With your review, this one moves to top of my "read" list! Luckily, I'm almost done with my current read, so I won't have to wait too long.

Thanks!!! You were correct in your earlier comment - I could not wait too long to get down and read this one. I think you will enjoy it as well!!!

I was excited to get some copies of this from David and couldn't wait to sit down and get started. Loved reading a novel set on South Padre Island. The story had plenty of intrigue and suspense. A great read and I am pleased that the island bookstore - Paragraphs, the same one mentioned in "Padre Puzzle", will be carrying this book and hosting David for a booksigning sometime in November.

Thanks Joni. I thinl it is great that the BookStore mentioned in the book is actually having an author signing. Should be a good draw!!!