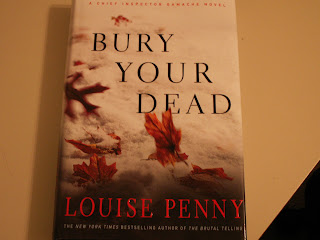 Author Louise Penney has another one with Chief Inspector Armand Gamache of the Sûreté du Québec. This is called Bury Your Dead. Mostly we have seen him in Three Pines - a small community in Québec. Now he is in Quebec City. He is on vacation but it is not all fun and games. He has recently come off a case where he was unable to save a team member and he and other team members were seriously injured. He is here to recover - both physically and mentally. He is spending time doing research at the Literary and Historical Society - a library. (This is an interesting library as he is allowed in the library with his dog - a German Shepherd.) The library research and late night walks provide a little distraction for the inspector but thoughts about his previous case still bother him. In addition he is getting letters that raise doubts in his mind about another case he investigated and whether they prosecuted the right man.

When a local historian is found murdered in the Lit and His, Gamache is asked to assist with the investigation. This murder can cause some conflicts between two communities in Quebec - the francophone and the anglophone. Historically these two communities have been on the brink and this murder could be a catalyst fueling the bad blood between them.

Gamache has his hands and thoughts full with this local investigation and what went wrong with the last case he was involved with. So he asks another member of his team – Inspector Jean-Guy Beauvoir – to return to Three Pines and quietly recheck the case and their original findings.
The story shifts back and forth from the investigation in Quebec City being conducted by Chief Inspector Gamanche and the investigation in Three Pines by Inspector Beauvoir. It also shifts between local / historical history involving Samuel De Champlain – the recognized founder of Quebec – and the personal memories of the disastrous case that has put both inspectors in rehabilitation. This helps demonstrate how ‘human’ our inspectors are.

I think the author has demonstrated again just how versatile she is with her story-telling. She has made this story so appealing in so many ways - including blending history lessons in to make it believable as well. This is definitely a MUST READ!!! Be sure to check it out.
Posted by misterreereeder at 10:04 PM

Sounds like 2 for the price of one and both are well done. When I get caught up, I need check into this one.