Triplets. When two of the three nine year-old girls turn up missing at a theatre / mall, it makes the news. And Then There Was One. This is the latest by author Patricia Gussin. 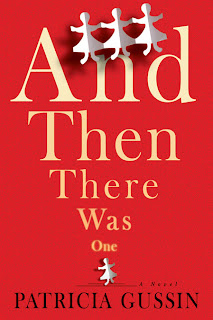 I read another one of hers a little while back and it was called The Test. So when I heard about this one I definitely wanted to read it. The latest book is different from the other one. While it is different it demonstrates the ability of the author to tell a multi-faceted story.

As mentioned above, the disappearance of the two girls makes the news and the story blends just enough of this into the story - mostly by the use of headlines at the beginning of each chapter. But the story goes beyond the news angle of the story. It also blends the investigation process in the story. The process takes into consideration a variety of different suspects. In light of other disappearances of children the parents (Katie and Scott Monroe)and other family members are considered potential suspects.

Other suspects are considered based on their occupations. Katie Monroe was a forensic pediatric psychiatrist and has testified in cases involving other children. Scott is with the Yankee ball system and has made decisions that affect other people. This opens up the possibility of somebody wanting revenge on either of them.

Another possibility involves the possibility of a racial motivated crime. Katie and Scott were a mixed-race couple and the disappearance occurred in an area where there was a highly prejudiced group.

Without a lot of clear evidence it was hard to pin down a motive for the taking of the girls.

Beyond the news and investigation process considerations of the story, there is also the personal level of the story and how it affects several people. Katie who is a professional finds it difficult to deal as a mother on the other side of the coin. Jackie who is the one of the three not taken winds up in a coma induced by all the concerns she is dealing with as the one left behind. The agent in charge Streeter reflects on the possibilities if his kids were the ones involved in the disappearance.

There is so much to this story that I cannot do it justice in this little review. It is a story you can not make your own decision about with out reading it for yourself. I strongly recommend you try it out for yourself. To use a phrase similar to one I've heard before - try it, you'll like it!!!
Posted by misterreereeder at 6:56 PM

WOW! appears there's a lot of intensity to go along with the storyline. I can see why you liked it as well as the first book.