My Introduction to Derek Stillwater 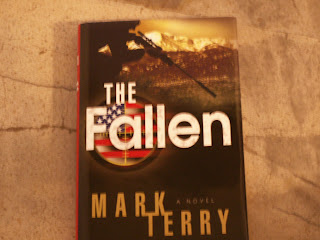 Who is Derek Stillwater? I had no idea until I was introduced to him in this book The Fallen written by Mark Terry. I did not realize Derek was in two previous books - The Devil's Pitchfork and The Serpent's Kiss - so he has been around before.
To some, Derek Stillwater is thought to be dead. He is actually introduced in this book as Michael Gabriel - a part of the maintenance staff at a Cheyenne Resort near Colorado Springs. This is the site for a G8 Summit and Derek is undercover here. He was a member of Special Forces, a part of Homeland Security, and a specialist in biological and chemical weapons.
He is here in this time and place because of a potential threat by a previous enemy (and friend) who was also thought to be dead. His friend was a previous colleague named Richard Coffee and goes by the name of The Fallen Angel.
This was one of the things that made this interesting to read - it was hard to see a clear line between friend and foe / good and bad. Everybody on the "good" side is NOT necessarily good and everybody on the "bad" side is NOT necessarily bad. This is one of the reasons Derek is thought to be dead - in some circles he is considered an enemy and potential terrorist. Only a few know he is still alive and only a few know he is where he is at because of the threat on the G8 summit. Also interesting is how in some cases "friends" and "foes" will have to work together to get through this threat.
Richard Coffee knows how the system works since he used to be on the inside. This is how he is able to "crash" the party - that - and his ability to convince others to help him. He has recruited some on the inside and some on the "other" side.
Michael (IE., Derek) is virtually on his own. Even people on his side are not aware he is there to guard against the unthinkable. When a counterpart from the Russian side recognizes him, he must convince her he is there to help. They form a delicate alliance that will be important to the success of the mission. Saying it is delicate is putting it lightly. She must also come to grips that one of her own has become a member of the Fallen Angel's team.
The Fallen Angel and his colleagues are successful in capturing and isolating the world leaders. He makes his demands for the freedom of other terrorists. Little does anybody know just what is in stake.
The "good" guys are at somewhat of a disadvantage because they do not really know who is on their side and who is on the other side. I think the best way to experience the book is by reading it for yourself. As for myself, I plan to "go back to the beginning" - the beginning of the series that is. I am glad I got to get an early look at this book myself. I count myself as one of the new fans of Derek Stillwater but this was also great because it was not just a one man job to stop the threat - several others contributed to the success.
Posted by misterreereeder at 6:29 PM