A Legal Thriller - Frame Up 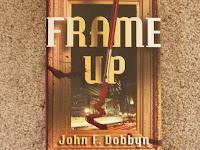 One day he was going to have lunch with his friend. He was also expecting some news from Michael as well. When he approached the car his friend was in, the automobile exploded. When he woke up in the hospital later, he learned the car exploded with his friend in it - and his friend did NOT survive.

After he went to the closed casket funeral for his friend, he returned to work. He was a partner in the Devlin and Knight law firm. His partner asked him to ride with him and they went to a church. It was here Knight learned of a curious relationship between his partner Lex, a church official Monsignor Ryan, and a mob boss Mr Devlin. In spite of their differences, they had a relationship / friendship that dated back many years ago as kids.

The purpose of the meeting turns out to be hired as a lawyer to defend the son of the mob boss. Although he has not been arrested or charged yet, they learn he will be arrested for the murder of Knight's friend. After hearing assurances that the son is NOT involved with the mob and did NOT kill John, Knight comes to an agreement to take him on as a client. Knight is determined to find out who killed John and why.

This just sets the story up so far. I do not want to give away the story but let me share some thoughts I had as I read the story.

I have heard it said that lawyers have tricks up their sleeves - kind of like magicians. In this story, Knight is not the only lawyer with tricks up his sleeve but he has something else in his favor as well - "cajones". It seems he has more than his fair share of successes at bluffing his way through situations when he is investigating.

Now my final "tease". It probably is apparent that the title Frame Up refers to the fact that somebody is trying to frame the mob boss' son. There is more to the title and you need to read the book to find out what it is about.
Posted by misterreereeder at 4:55 AM

Oh Wow - sounds like another good read I would have missed...I was even thinking (as I read your review) that I would put this 3rd or 4th in my "stack" of books to read. THEN, I got to the last paragraph - gonna have to put this on top of my "stack".

Completely I share your opinion. I think, what is it excellent idea.

OMG--that sounds like an absolutely wonderful story! I agree with JJ--this is going toward the top of the list.

Stayed up late last night finishing this one because the last 1/3rd to 1/4th was that good! Actually, I could have probably done a cover to cover read in one sitting if real life "obligations" didn't get in the way..teehee. I am so glad I bumped this to the top of my "stack" of books to read. Now it's off to Veinice and another mystery. Thanks again for the reviews.