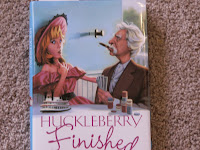 Mark Twain was one of my early interests in reading. Of course he was not a mystery writer but he did write about the adventures of Tom Sawyer and Huck Finn. And I can not forget about some of the wit he used in some of his other writings – it was fantastic!!!

Needless to say, when I heard about Livia Washburn’s latest Delilah Dickinson Literary Tour Mystery, I was immediately interested. The title is Huckleberry Finished and it centers around a tour on a riverboat cruise that Delilah’s company has put together. The cruise starts in St Louis and cruises down the Mississippi River to Hannibal. It is just a leisurely cruise with some gambling and a real live Mark Twain / Samuel Clemens entertainer. Sounds like fun doesn’t it!!!

This is the first time Delilah has booked this cruise and she hopes it goes without any hitches. The first hitch is a minor one. One of the passengers is talking loudly on his cell phone - dealing with business – and disturbing the peace and tranquility of the cruise. Delilah addresses this issue and hopes it is the only hitch the cruise encounters. There is no such luck. It seems this tour is likely to suffer the same fate as her first tour. All I am going to say is that murder plays a part in this tour as well.

This book (just like the tour in the book) is not to be like a story written by Mark Twain. Instead it is to be of interest to the fan of Mark Twain. There was the interesting portrayal by the Sam Clemens character – not just for the other characters on the cruise but for the reader as well. The quotes were great!!!

Not only did Livia Washburn tell such a good story, she also continued a trend she started in the other Literary Tour Mystery book. At the end of the book she included some “real” tour information about Hannibal, and things to do. Are you ready to travel?
Posted by misterreereeder at 2:21 PM

FUN!! a title from a fave writer of mine, a mystery, some Mark Twain, and real tourism info...I'm onboard!! thanks for sharing and onto my book stack it goes :D

What a great resource!

This is very interesting information here. I wish I had found this first before I signed up for the other one. This is much better!

I'm gonna' get me this book. Sounds like my kind of thing.