NEW RELEASE by Sharon Potts - In Their Blood 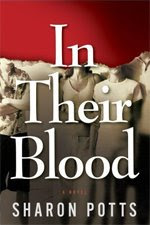 COMING IN SEPT 2009. It's a new release by Sharon Potts. And you can see it is called In Their Blood.

This is a very special book for the author. The reason it is so special is because it is her first novel. After getting the opportunity to read the book before it is actually released, I must say I was impressed. The author definitely put her best foot forward and spent a lot of time getting it right. Here is the link to the author's web page - http://www.sharonpotts.com/.

Let me tell you a little about the story. First, the protagonist is Jeremy Stroeb - a son. He dropped out of college in his senior year and went travelling in Europe because he was dissatisfied. He was not ready to be responsible and live a life like his parents did. He once had a good relationship with his father but the relationship was now strained because his dad wanted him to come back home and be responsible.

His mom and dad (and sister) just return from a trip to Europe - after trying to convince him to return home. It takes the events that occur that night to bring the young Jeremy back home.

His sister, Elise snuck out of the house that night to go see her boyfriend. While she was gone, somebody came into the house and kills the parents. It was the death of his parents that makes Jeremy come back home. But Jeremy half suspects the joke is on him and that he will return to find out his parents are not dead - and this only angers him.

When he discovers his parents are indeed dead, he experiences some remorse and is determined to find out who murdered his parents and why. To top it off he learns that his Uncle Dwight has been named as the alternate guardian for his sister - provided Jeremy does not take that responsibility. Why does this frustrate him? One because his parents have placed him in this position. Also because his uncle says Jeremy can not handle the responsibility. His uncle and aunt never had kids because they chose not to. Now they are going to accept this responsibility (and the estate that come with it).

By all appearances it seems Jeremy is going to accept responsibility and his uncle vows to prove he is irresponsible. Jeremy gets a job with the accounting firm his mother had worked at and he registers for evening classes at the school where his dad was a professor at. He was intent on finding out if the murderer was somebody who worked with either his mom or dad. What he did not expect was to discover things he did not know about his parents.

This is all I am going to say about the story - don't want to give it away. But there is a quotation I have heard before - Keep your friends close and your enemies closer!! Good quote but sometimes it may be difficult to distinguish between the two.

A final thought - this review cannot do justice for the book - it's merits stand on it's own!!! Great job by a new author.
Posted by misterreereeder at 9:46 PM

Really enjoyed your review...sounds like I'm going to enjoy this book too!