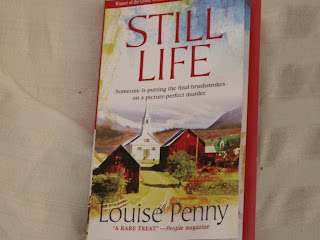 Our August mystery group selection was a pleasant surprise for me. It is called Still Life and was written by Louise Penny. This is the first in the series with Chief Inspector Armand Gamache as the sleuth. I am not certain who in the group suggested this book but .... it is a thumbs up from me. HERE IS THE VOTE BY THE GROUP - 9 THUMBS UP!!!

This story takes you north of the border in Quebec and some of the language and words was different for me. And I thought I knew what "tabernacle" meant? Obviously there are some other ways to use the word.
A lady in Three Pines is found dead and the Inspector comes in to investigate. Could her death have been due to a hunting accident? This is for the Inspector and his team to find out - And things do not add up. The mystery is definitely there. But there was more to this book than just the mystery I enjoyed. It so happens the woman who was found dead is an artist of sorts. Lot of people in this town are artists of one type or another. The author of the book did a great job describing the painting by the dead woman. So well as a matter of fact that I was sure I have seen the painting. And I am not typically into art and painting.
Another thing I believe the author did well ... describing characters in the story. Not just a physical description of the characters but some good character development as well.
Posted by misterreereeder at 5:59 PM

Nice review--sounds like one I'd like to check out since it has a good mystery and very descriptive so I can be taken away and indulge without having to leave my A/C.

This was in an email I got from the author.

How kind you are! I’m SO glad someone suggested STILL LIFE – and very relieved it received 9 Thumbs UP! Lovely review, too. As you know, posting reviews and spreading the word is so important these days to a writer. I do appreciate your support – and your kindness in finding me and writing. And please, if you’d like, thank the other clearly brilliant members of your group.