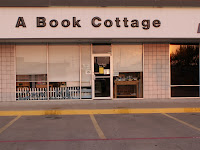 Yes – I am dropping a name some people may be familiar with. But I am not just dropping his name for the heck of it. I knew Willard Scott was on television and had seen him on the today show. What I did not realize was that he was also an author of some mystery books – and I do read mysteries. I ran across one of his books at a local independent bookstore in Garland , TX – A Book Cottage. He co-authored the book with one of my favorite Texas authors – Bill Crider. The name of the book is Murder Under Blue Skies. Now I am not sure what it means when you have a co-author but this book definitely reflects Willard Scott. It is not a real complicated mystery but it definitely is FUN!!! 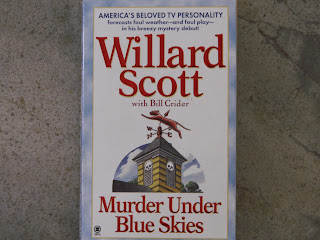 The sleuth is called Stanley Waters – a former weatherman himself who decided to return to his hometown and open a bed and breakfast. He had no interest in becoming a sleuth. - then a murder occurs at the grand opening party of his bed and breakfast.

He also was not expecting to rekindle a romantic relationship with a girl from his past. She is now the chief of police in his hometown. This is not a heavy romance but almost like a teenagers' first romance - very simple. He is very subconscious around her and finds his bald head getting red at times.

No more about the story now. There was one other interesting thing about the book though. At a few spots before new sections of chapters begin, the author includes little "weather cliches". Here is one he uses in this book - if trees keep their leaves until late in the fall, a bad winter will follow.
Posted by misterreereeder at 4:00 PM

I love knowing this! I like that man--bet I would love this book! Thanks for the post mr--a book I must add to the ever growing list!

This is really cool -- I'd have never known and missed it completely without this.

misterreereeder.blogspot.com; You saved my day again.