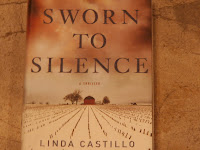 An author acquaintance of mine - Rebecca Russell - knew that I like to read books by Texas authors set in Texas locations with Texas sleuths. She had a suggestion for me. Try reading an Amish mystery written by a Texas author. The name of the Texas author is Linda Castillo and her first book in the Amish mystery series is called Sworn To Silence.

As I read the book, my expectations were somehow dashed. There were very few similarities between the police chief in Fargo and the police chief in Painters Mill, Ohio. They were both women but other than this they were different. In the movie The Witness, the view of the Amish culture was one of an outsider being thrown into a culture that was almost foreign. But in this book the Amish culture is mostly seen from the eyes of somebody who has been there. At most we only see that it is a different lifestyle.

The police chief in this book is Kate Burkholder. At one time she was a part of the Amish culture but she chose to leave it. She returned to her hometown when she accepted the position as the police chief. She has been back for almost two years when a horrible murder is discovered. This murder seems to be related to a string of murders (and rapes) that happened over 16 years ago. Not only that but it also seems to be related to a horrible experience Kate and her family had 16 years ago. Kate was raped by a man - an Amish man when she was 14 years old. During this nightmare experience, she shot the man. Her father and brother took the body away and buried it. Since the string of murders ended at the same time and the case went cold, she naturally thought this man was the one responsible for them. With the new murder, it brings back those memories and secrets. She is concerned because now she is not sure if the man was actually dead. Will there be more of these murders and should she come clean about her secret?

Is this the kind of book you would enjoy reading? If you like a good mystery I think you would. And as an extra bonus, the second book in the series is expected to be released in June. The title of the new book is Pray For Silence. Sounds promising to me. If you want to check out more info about this author, check out her website at http://www.lindacastillo.com/.
Posted by misterreereeder at 7:59 PM

Wow - you're review didn't go the way I thought it would...making me guilty of preconceived notions too. This does sound very interesting set in a culture I only know from pictures of buggies on the roads and the movies.

JJ - Yeah ... there are the buggies and the dress still. But it just doesn't have the big shock value of seeing it from the outside. The Amish community is still portrayed as a shut off comminity though.

I absolutely loved the book from the first page through. I also know nothing about the Amish and tried to learn a little about them. I am so hooked and am awaiting release of your next book. Again, it was wonderful, edge of my seat book! LL

My wife and I have read both of Castillo's Burkholder books and are enthusiastic fans. The books merge insight into the Amish people with page-turner detective work. The next novel with the Kate Burkholder character, Breaking Silence, will be released this Summer.

My wife and I have read both of the Castillo books with the Kate Burkholder character, and we are enthusiastic fans. The stories engage the reader with insight into the Amish culture combined with page-turner suspense. There is a 3rd book scheduled for release this Summer.