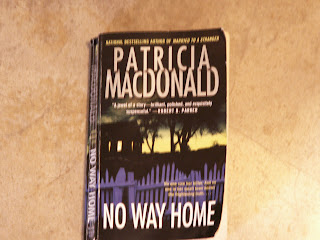 Have you heard the phrase "Different strokes for different folks"? Loosely translated it means we all like different things and that was evident with this month's mystery book selection - No Way Home by Patricia MacDonald. There was a split when we took our traditional vote - 4 thumbs up and 4 thumbs down. But that is one of the great things about belonging to this reading group - we get exposed to different books and authors. We get to find new interests. We each have our own things we look for when we read a book. Some it may be the plot, others may look for plausibility, and others may look at style.

There were two things I saw in the story that I liked - the story and the clues. But first let me share my first impressions. Before I began reading I looked at the title - No Way Home. This triggered a thought about The Wizard of Oz. Do you remember the phrase "There's no place like home"? Well when I started reading the story there is talk about tornadoes - again it brings to mind The Wizard of Oz. Other than these two initial impressions though this is where the impressions end - cause this is NOT The Wizard of Oz after all.

The story starts with a family - a woman, her husband, her daughter, and her son. There were some interesting relationships in this family. The woman and her daughter were somewhat close to each other. The husband and son seemed to have more of a relationship with each other than the woman had with either of them.

The early mention of the tornado just seems to indicate something bad is coming. Bad first comes with the murder of the woman's daughter. There seems to be several possibilities for who the murderer is - the first and most predictable being an escaped prisoner. But first possibilities aren't always the best. Later we learn the local sheriff's son is suspected of being the murderer. He certainly is not thought of very highly by most people and seems to be disappointment to the Sheriff. Although thought to be a suspect, there are just to many things that did not add up.

Several points in the story there are clues that I noticed but did not realize were pointing to the real murderer. (It seems other readers may have picked up on these clues and knew who the murderer was pretty early.) I could list some of these clues but do not want to give away the murderer. The story ended with some surprises.

If you have not read this book, do not let the split decision dissuade you from reading it. You never know - "it might be your cup of tea".
Posted by misterreereeder at 9:24 PM

Another teasing and intriguing review....hmmmmmmm

Hum...you have really peaked my interest. But I can't decide if you are giving it a thumbs up or not! :)