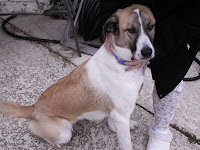 Hi - my name is Annabelle. Well ... this is my new name and this is a story about how I got my new home and new name.

You see ... I had been staying at a place for the past few weeks that was not my home. I do not know what to call it but there were a lot of other noisy dogs and cats there. I certainly was not a happy camper there. The only nice things worth mentioning is that I was given food and water while I was there. Occasionally I would see a nice friendly face but I would definitely NOT call this place a home.

Then one day I had a couple of visitors - two ladies. They were both pretty and one was younger than the other one. At first I was resistant. One of the ladies had to pull me out of the cage and take me to the back. But when she got down on her knees and started talking to me I couldn't help but warm up to her. I liked her voice and she was so nice. The other lady with her was nice too. She spoke to me and played with me. For some reason they both called me Annabelle. This was a very happy time. I was upset when I was returned to the cage I have been spending the past few weeks in because they left me there.

Just a while later, another lady came by and asked for me. It was great because I did not go back into the cage but went in the car with the lady to a nice house. I could not be happier. I had a nice place to sleep, not so many noisy neighbors, and food and water. I did not realize this was only going to be a temporary stay over.

After a couple of nights I was loaded back into the car and taken back to the place I had spent the previous few weeks. This was a little bothersome. We walked into the door and the lady started talking to the guy who was there. I overheard the lady who brought me back saying she was allergic to me. I do not know what that means but it did not sound good. That is when I noticed the other lady. She came out and saw me. I do not know who was the happiest - me or her. They talked for a while and that was when I discovered I would be going to my new home. I got into a car with her and she talked to me until I got to my new home. The lady left me in the car for a little while but then she came and brought me into the house. Then she took me to the back yard. Boy ... was I glad. I really needed to go.

Afterwards, she brought me back into the house. I was still nervous. Although I had not seen anybody else yet I did not think I was alone. She lead me to this crate with a cover over it. I was not eager to go into it - even though she told me to. She put my front paws into it but I still resisted. She even tried pushing me in. Next thing I know she picked me up from behind and shoved me in before closing the door. I laid down as she covered me up and wondered what was in store for me later. There was nothing else to do but to go to sleep.

Later I was awakened when I heard some doors open and close. I heard some voices and one of them sounded somewhat familiar. I also heard a deep bark in another room. Where did that come from? I waited in anticipation.

Finally, I heard the other voice from the other day. She came over to the crate and was sweet talking to me. I could not help it - my tail gave me away as it wagged and showed how excited I was. I have to get used to my new name. They keep talking to me so it must be my name.

A little while later the other lady came back. This is when I was introduced to another dog in the house. They call him Mosey and we briefly had a little tiff but things settled pretty quickly. That is because I'm a lover not a fighter. Looks like I am gonna have to share the attention with the other one.

I've heard something before and now I think I know what it means - Home Sweet Home.
Posted by misterreereeder at 1:06 AM

Hi!!! writersplot.typepad.com is one of the best informational websites of its kind. I enjoy reading it every day. I will be back.

Glad to hear you and Mosey are settling in...I feel pretty confident in telling you, you're gonna love it there!!!