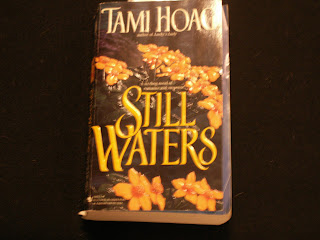 This month's author selection for our discussion group was Tami Hoag. The author was suggested by my wife who is not a formal member of the group but she has read a lot of what the group has read as well. As is typical for the group, we try to start at the beginning of the series so we chose to start with Still Waters.

Incidentally ... my wife who is a fan of Tami Hoag's books indicated that they are not really a part of a continuing series. She told me we probably should have chosen another one of her books. Oh well ... sometimes you win ... sometimes you lose.

Let me introduce you to this book. The note on the book cover describes it as "a sizzling novel of romance and suspense". Still Waters is a place ... well ... actually it is Still Creek. This is a small town in Minnesota in an area where there is a population of both Amish and non-Amish people. I thought it was interesting to learn that the Amish refer to the non-Amish people as "English". Among the "English", you have those that were insiders and those that were outsiders.

One of the main characters is an outsider - Elizabeth Stuart. She and her son have moved to the area and she has bought the local newspaper business. Not only is she an outsider but she is a well publicized outsider. She recently went through a divorce from a rich man and was destroyed through the process with some false accusations. This is another strike she has in this place she is trying to make a fresh start. As a result of this divorce (and earlier experiences) she has hardened herself and has determined men do not have a place in her life. Things do not bode well for her when she discovers the body of one of the "insiders" dead / murdered in his automobile.

Another main character is one of the insiders. His name is Dane Jantzen and he is the local sheriff. I will not go a lot into his background (that is part of reading the book) but he is not looking for any romantic attachments. He just wants to do his job here in Still Creek. His "apple cart" is about to be upset. There has not been a murder in his town for a loooooong time and now he must deal with one. He will find himself clashing with this outsider - in more than one way.

There were several more interesting characters in the book and they are a part of what makes the book good to read. Now ... you may be wondering what our group thought about the book. Well ... here is the vote - three thumbs up; four thumbs down. Some of the people were willing to try out other books by the author.
Posted by misterreereeder at 8:43 PM

Kudos for your wife's recommendation and to your discussion group...I like what you've shared here! I need to finish up my current reading and check this out. I have to admit, I'm intrigued by the Amish and enjoy peeks into them through fiction and even better when there's a mystery involved :-)