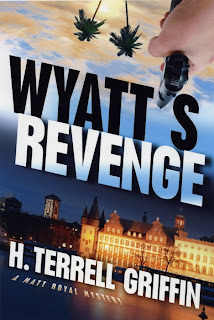 Yes ... it is the latest Matt Royal mystery by H Terrell Griffin. It is called Wyatt's Revenge. Terry Griffin is another Florida author I have read before. As a matter of fact I have enjoyed a coupe of other books in the Matt Royal series. If you are interested, H Terrell Griffin has a website at http://www.hterrellgriffin.com/. Here is a quote about the book I found about the book - "Wyatt’s Revenge is a hard-hitting, action-packed tale about good versus evil, justice versus revenge, murder, and redemption."
Who is Matt Royal? Well ..., he is a currently a beach bum with a complex past. He is a retired lawyer. He was also in the service. Now he spends his life on his boat, with friends, and drinking.
But when his friend Wyatt is brutally murdered in his own home, this gets Matt's blood boiling. He is not only determined to find out why somebody killed his friend who was a college professor. But he also wants to make sure there is justice and revenge for the death.
Once he starts unofficially investigating, an attempt his made on his life. A bomb is put in his truck. It explodes and kills a car mechanic picking it up to take to the shop. Now Matt has two deaths to avenge.
Determining who is responsible for the murders is a big task but Matt (and Wyatt) has a lot of friends with connections. It isn't long before Matt discovers who actually killed his friend but the reason remains a mystery. It becomes clear however that another professor (and colleague of Wyatt was also murdered the day after Wyatt. Whatever they were working on appears to be the underlying reason they were murdered and somebody does not want the truth (whatever that is) to get out.
Typically I do not like to tell to much of the story because I do not want to give it away. Besides that ... you would miss out on a lot of what happens if you do not read it for yourself. What I will tell you is that the book takes Matt (and us) to Germany. We also get some glimpses of the past (the Hitler era). If you read the book, you will find out the connection between these glimpses and these murders as Matt uncovers them with help from some friends. I encourage you to check out this book!!!
Posted by misterreereeder at 12:39 PM