Texas Connection with Dismissed with Prejudice

I certainly was excited to find this Texas connection with the book Dismissed with Prejudice. The author Fletcher Cockrell lives and works in the Houston Texas area. Thanks to Lindsay at Phenix & Phenix Literary Publicists for connecting me with this book. 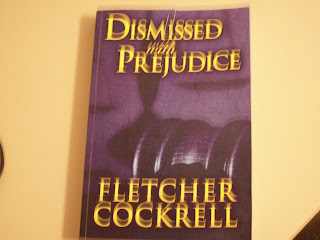 By the way, this is another Texas connection - Phenix & Phenix is located in Texas as well. If you are interested, you can find out more about the book and author at this link.

As you may be able to tell from the title - this is a legal drama / thriller. Did I mention Mr Cockrell was an attorney? So that means he would have an understanding of legal stuff based on his background. Well .... now for a brief review of his novel.

Craig Frazier is an assistant basketball coach in the LSU program. He works under Coach Tom Boyd and has been one of the reasons the school has been able to recruit a lot of good talent into it's program. Under the direction of his boss he has at times done some things that are minor infractions under NCAA rules - but these are only a portion of the infractions going on behind the scenes.

By agreeing to quit, Craig could get paid for the remainder of the contract period. If he does not quit, he will be fired and he will lose a whole lot more. Craig refuses to quit because he feels he was only doing what he was told to do and he does not want to take the whole blame - even though he knows publicly the blame will be leveled on him.

This is not the first time Tom Boyd has dismissed one of his assistant coaches in order to shift the scrutiny from himself. When Landon Duhon, a lawyer, hears about the latest firing, he suspects something fishy is going on so he approaches Craig about representing him in his case. He and Craig realizes they will not only be going against a popular coach but also a powerful institution in the form of LSU. What they do not know is how far this case will reach and who else stands to lose from it. If they had an inkling of an idea of what some of the measures that would be taken, they may have decided to drop it. As a matter of fact, at one point Duhon is on the verge of dropping the case when he experiences a personal loss - one he knows is a result from pursuing this case.

This story is indeed a thriller. It is not something I would have been interested in initially but I have to admit I am glad I read it. Of course I felt some personal connection to the story when he mentioned a recruiting trip to San Jacinto College in Pasadena, Texas - a junior college I attended before -AND- I know they had a good basketball program there. I think the background of the author as both a lawyer and his personal connections to sports were definitely assets he used well in writing the story.
Posted by misterreereeder at 1:12 AM

Normally, I wouldn't be pulled towards a book with a backdrop of college basketball. However, your review peaked some interest....I'll keep this in the back of my mind.