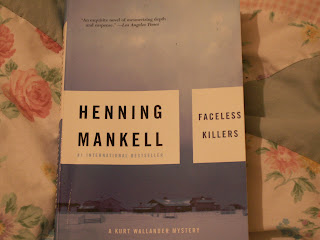 The September selection for our Mystery Reading Group was an author from Sweden - Henning Mankell. The title of the book was Faceless Killers. This is the first in a series - A Kurt Wallander Mystery.

Kurt Wallander is the detective in this mystery occurring in Sweden. He is called into an investigation of an uncommon murder in this community. An elderly farmer is murdered and his wife dies shortly thereafter. When Kurt starts his investigation he discovers there are secrets the murdered farmer had that his neighbors (and his wife) were not aware of. There are very few clues leading to the motive and reason for such a brutal attack but Kurts investigation examines any potential clue - even if they lead no where. That was one of the things that was both frustrating and interesting about this book. It was frustrating because a lot of potential clues lead no where. But it was interesting because you see how an investigation goes.

The other thing nice about the book was the refreshing change in the type of character. A lot of times the character is somewhat of a "super hero" - with no flaws. Kurt Wallander was just a guy - one with problems - a "normal" / "real" person.

So ... you are wondering how the group felt about the book? Well ... when we took a vote - it was six thumbs up and one thumb down. Several members of the group liked it so much that they have already started reading more books in the series. There was also talk about the Kurt Wallander mystery series on public tv.
Posted by misterreereeder at 9:31 PM

Sounds like a book I'd be up for, especially with such a good endorsement from the group :-)