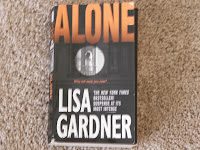 As you may know, there is a group of us who meet at Barnes & Noble - Firewheel Mall to discuss a mystery book we preselected. This month's selection is called Alone and was written by Lisa Gardner. I have to admit I lost track and showed up a week early for our discussion. Was it because the book was so good that I got in a hurry? Or was it because I just was not paying attention and did not realize the 7th was the first Wednesday of the month and not the second Wednesday of the month? I will let you decide. I will also let you know what the group thought about the book later in this post.

To review this book, I will acquaint you with some of the characters. The title word - alone - has a lot to do with more than one of them.

Bobby Dodge is a law enforcement officer - specifically a State Trooper for the state of Massachusetts. In addition to this he has been a member of the Massachusetts State Police Special Tactics and Operations (STOP) Team for over six years. This is their version of a SWAT team and he is a highly skilled sniper.

His team is called out to a house where shots have been reported as fired. Part of the team has not arrived and he is doing what he is supposed to do as a sniper when he sets up his scope and rifle to observe. As he observes he sees a man with a gun and a woman holding her son close to her. The man takes the kid away from the woman and points the gun at the woman. Being alone, Bobby Dodge makes a judgement that the man is going to shoot the woman and he shots the man before he does. Although he feels justified in his decision to shoot, he is second guessed and criticized for it. The man he shot is the son of a very prominent judge who threatens him unless he testifies the lady was responsible for the fight at the house.

The woman who was threatened by the man with the gun was a previous victim as a child. She was kidnapped and raped over a period of time. She was also left alone in the woods - in a hole during this time. Although she was finally rescued, she never seemed to recover completely. She finally got married to this guy and they had a baby. She had a hard time dealing with her son and he had some undiagnosed physical/medical problem that also contributed to her sense of helplessness.

Her feeling of helplessness increased after her husband was killed because his parents are trying to get their grandson away from her. They suggest to others that the kids' medical / health problems are caused by her in some way. The judge uses his powers to isolate her in as many ways as he can.

There are several more instances of "aloneness" mentioned in the book and there is a whole lot that happen as well - including murders. In my opinion, if what I have mentioned above "sparks" any interest, you would be losing out if you do not read the book for yourself. And a police detective in the story - D.D. Warren - is a repeat character in other Lisa Gardner books. I know I am likely to read more.

Speaking of reading more, let me give you the vote of our Discussion group on this book. There were nine in attendance. Six people gave the book a thumbs up (of which 5 said they would read more by this author). Two of the others were not comfortable giving the book a thumbs up but could not give a thumbs down either. The last person did not read the book and abstained from the vote.

Oh incidentally ..., I recently read a book by Tami Hoag called Bad Acts. If you liked that book I think you will like this one too.
Posted by misterreereeder at 8:55 PM

Sounds like a good read. Lots of twists and turns. As far as mixing up your dates, at least you knew it was July with all the craziness of the summer heat and wacky weather around *grin*