I just finished Karen MacInerney’s book called Murder Most Maine. This is the third book in the Gray Whale Inn Mystery Series. The other two books in the series were Murder On the Rocks and Dead and Berried. Natalie Barnes is the proprietor of the Gray Whale Inn. She left her 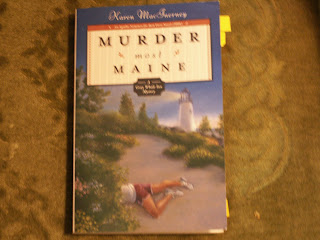 home and a state job in Texas to come to Cranberry Island, Maine where she has been the outsider.

A weight loss retreat is being hosted at the Gray Whale Inn and Natalie wants everything to go right - especially since it could mean return business. Will it be business as usual? Only if you expect murder and mystery to be usual. The author does a great job weaving the story together. I can tell you about some of the highlights of the story but you can only get the connections by reading it for yourself.

Is the number three significant in this – the third book of the series – or is it just a coincidence? Three boats - her Little Marian, John’s Mooncatcher, and Eliazer’s Windward - were used to transport her guests from the ferry to the Inn because she could not get the Inn’s van to start. Three deaths were discovered in this book. The first was a skeleton found at the old lighthouse being remodeled for a tourist attraction. The second was the trainer for the retreat and the third was a guest of the retreat. Three of the guests were friends attending to lose weight for an upcoming reunion. Have you heard the phrase – three’s a crowd? This is how Natalie felt when around John, her neighbor, and Charlene, the organizer of the retreat. Charlene lived on Cranberry Island years ago and had dated John back then. And then there is the phrase – third times the charm. In this the third book, Natalie who has been the outsider is beginning to be treated as one of the community by the other island folks. And again – third times a charm – Natalie and John are engaged at the end of the book.

Finally the author does a great job describing the scenery on Cranberry Island. She makes a telling description at the beginning when she compares the changing season on Cranberry Island with that of the Austin Texas area in May.

Will this be the last in the Gray Whale Inn Mystery Series? NO!! I just read on her website that she is working on the fourth book of the series. Looking forward to it!!! I hope she makes a trip to the Dallas area to promote the book when she does finish it. If you have NOT read the first two books in the series, by all means read them.
Posted by misterreereeder at 8:02 PM

ugggggg! I mean YEAH! an awesome review. I know I've heard you and MeadowviewThymes talking about this series. The "uggg" is because I've been in a non-reading funk (I know! how horrible!!!). I've got to finish what I've already cracked open and now I have choose between this series and an couple of earlier reviews that you've done. I think I need a vacation just to sneak off somewhere and read read read! Wouldn't that be nice :D Thanks for the wonderful review!

Thanks for not revealing too much..I have 2 books to go before this one!
JJ--I have the first 2 books when you want them! :)