October’s discussion group selection is “Big Red Tequila” by Rick Riordan. I have read this book before but have re-read it for our group discussion. I enjoyed it before and liked it the second time around. Now, as is custom for our reading group, I give it a “thumbs up”. 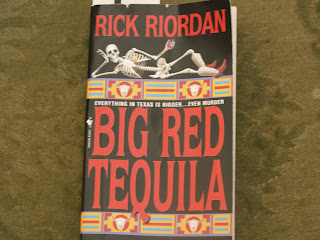 Tres Navarre is returning to Texas with his cat Robert Johnson and he has some memories from back then. Big Red and Tequila is one of those memories. He also remembers the death of his father a little over ten years ago. His father who was a sheriff was murdered in front of him in a drive by shooting. This was one of the reasons he left and he wants the mystery of his murder to be solved. Some things have changed since he left.

He is also returning because of the girlfriend he left years ago. Will things return to the way they were before he left? He has changed and he learns things have changed between them as well. Shortly after he returns, she disappears and so Tres now has two mysteries to solve. Can these two mysteries be linked? You will be surprised.

It is interesting to find out who does not want him to be around and who is there to help him. You also get a little taste of the San Antonio and Austin areas. Should I say more? Was the mob involved in killing his father? Well, sort of. Was the disappearance of Tres' old girlfriend linked to his father's death? Yes - but not necessarily in the way you might think of.

I suggest you find the answers for yourself by reading this book. Rick Riordan did great and he continued this series with several later books.

Sometimes it is just hard to decide how much to say about the book.
Posted by misterreereeder at 6:13 PM

Intriguing - onto to my wanna read list it goes :D Thanks for another GREAT review!!!

Thanks JJ. I thought the book was great - I just did not think my review measured up to the book.

Sounds like a GREAT book! Your review really made me want to read it. Now--if I could just find some time to read! :)